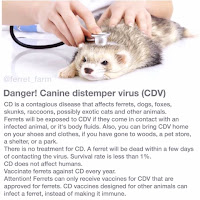 Vaccinate ferrets against CD every year!

Ferrets will be exposed to CDV if they come in contact with an infected animal, or it's body fluids. Also, you can bring CDV home on your shoes and clothes, if you have gone to woods, a pet store, a shelter, or a park.

There is no treatment for CD. A ferret will be dead within a few days of contacting the virus. Survival rate is less than 1%.

Infected ferrets have to be treated with antibiotics, supportive fluids and assisted feeding. Recovered ferrets may have permanent changes in behavior, dice significantly if the brain is affected.

CD does not affect humans.

Ferrets have been known to contract CD after receiving vaccines for CDV that are not approved for ferrets.

No matter what species of patient, what infectious disease, or what kind of vaccine, not all patients will be protected against exposure after vaccination. So called “vaccine failures” can occur for a number or reasons. Some reasons for vaccine failure in ferrets include:

Vaccine Reactions
Unfortunately anaphylactic (allergic) reactions to CDV vaccine are seen with all available vaccines. Reactions can also occur with rabies vaccinations, but are less common. The following statements underscore what we do and do not know about ferret distemper vaccine reactions.
Reactions occur in approximately 2 to 5% cases.

Vaccinate your ferret against canine distemper every year to keep him safe.